There is an upgrade proposed for Gardiner Park.

The current usage is not changing - it will still be open for active and passive recreation by the whole community.

About the proposal for Gardiner Park

In recent weeks there has been a lot of talk about Gardiner Park and the proposed upgrade which includes a synthetic playing field. The current usage is not changing. It will still be open for active and passive recreation by the whole community.

The upgrade is part of the NSW State Government’s ‘Planned Precincts’ initiative which includes Arncliffe, Banksia and Cooks Cove, known as the Bayside West Precinct. The State Government reviewed the needs of each of the ‘Planned Precincts’ and identified a number of required improvements needed to infrastructure to service the growing demands of the whole community.

The State Government consulted extensively with the community on the ‘Planned Precincts – Bayside West Precinct’ program and Council has also included the proposal in a number of documents that have been on public exhibition including the latest Operational Plan 2020/21.

The approval process for the synthetic field is accordance with NSW legislation and Council has met all its obligations under the Environmental Planning and Assessment Act 1979 (the Act).

Map of the proposed changes 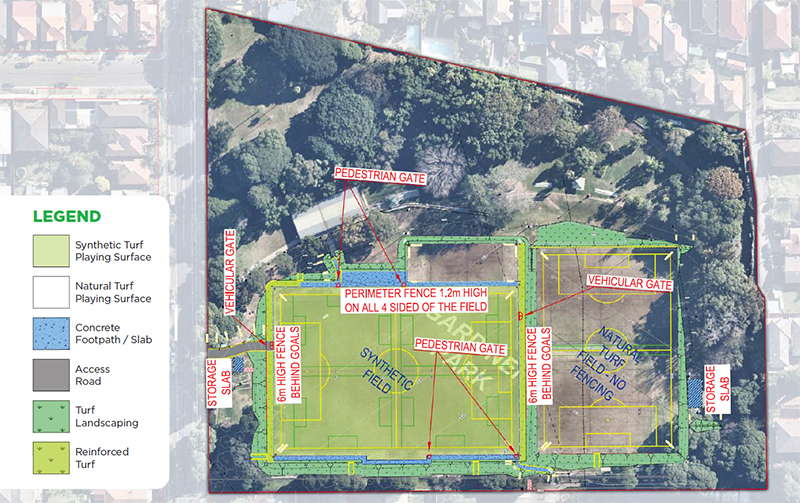 Does a synthetic surface mean the field moves closer to my back fence?

No. The current buffer zone will be increased by 0.5 to 1 metre.

Does the current proposal include additional lighting?

No additional lighting is included in the current scope of works.

Will there be extra parking available?

No additional parking is being constructed, as the use of the park has not changed. There is no increase to sporting activities.

Will there be emergency/accessible entries?

Does a synthetic field cost more to maintain?

Artificial grass is lower in maintenance, doesn’t require watering to thrive, doesn’t get muddy and damaged if used in wet weather, doesn’t get patchy from use during the playing season, doesn’t need to be replaced as often as turf. Natural turf needs to be relevelled, top dressed with soil and fertilisers, and patched with new turf to keep it in a usable condition each year.

A new irrigation system will be installed to nurture the natural flora and turf.

The technology keeps the temperature very close to that of natural grass.

The park is in a storm water flood zone. Drainage issues will be addressed during the construction.

What about the trees in the park?

An arborist has assessed all the trees and will be available during the building process. One tree has been identified for trimming. More than half of Gardiner Park remains as natural turf for flora and fauna habitat. No trees are being impacted.

Can I still walk my dog?

Yes, but it is not an off leash park so please ensure it is on a lead. The current usage of the park has not changed.

Can I use the synthetic field?

The synthetic field will be hired out to sporting groups for training and games. If it is not in use others can use it for exercise or practice. The gates will not be locked.

Will the park be fenced?

No, the park will not be fenced. But the synthetic field will have a 1.2 metre fence around its perimeter, with several access gates. There will also be a six metre high wire netting behind each goal to prevent soccer balls going astray or causing injury.

Will there be more late night noise?

Aspects of the park have heritage significance such as the two pillars at the entrance and the stone wall. A heritage study has been done and is a public document. The two pillars will be preserved during the construction phase.